Jerome C. Rousseau : expressing creativity
A Canadian artist, born in Quebec, who currently resides in Los Angeles and manufactures its products made ​​in Italy: a melting pot here, which explains the explosion from stylistic models signed Jerome C. Rousseau. The man launched his eponymous label in 2008, with a strong interest in design, music and art. "I started drawing shoes after watching a clip of Deee-Lite. I was influenced by his unique interpretation, especially by its retro style carried to excess." With technical knowledge of the shoe developed in London and in collaborations with Matthew Williamson, Isabella Fiore, John Richmond and John Rocha, Jerome C. Rousseau pushes the styling beyond creativity. In 2010, Vogue Italia awarded him the prize "Who Is On Next". Models built in the traditional way are now worn by many Hollywood stars such as Charlize Theron, Cameron Diaz, Scarlett Johansson, Kristen Stewart, Katie Holmes, Olivia Wilde, Nicole Richie and Drew Barrymore. 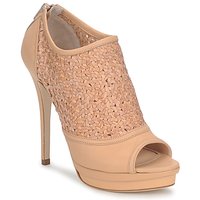