Veronique Branquinho, luxurious knowledge
Veronique Branquinho was born in Belgium in 1973. An heartfelt artist from the beginning, she enrolled in the Saint Lucas art school in Brussels and specialised in painting, later studying fashion at the Académie Royale des Beaux Arts in Anvers. Once her studies were finished, she worked as a fashion designers for numerous fashion houses before launching her own brand. From then on, her designs have been hugely successful among fashion writers, her peers, and her international and demanding clientèle. Her talent has been recognised and she has received numerous prestigious awards such as the VH1 Fashion Award in New York at best designer. Audacious yet not extravagant, Veronique Branquinho designs casual chic styles with simple lines and an impeccable finish. 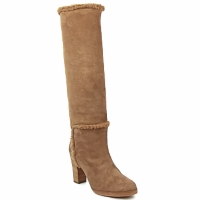