Moon Boot : One small step for Tecnica, one giant leap for fashion!
Literally coming out of nowhere in 1969, the Moon Boot has made a comeback in the last few seasons and is still continuing their legendary rise. It was Giancarlo Zannata who, head of the company Tecnina International which was the world leader in trekking and after-ski shoes at the time, had the idea to design a pair of shoes inspired by Neil Armstrong and the conquest of the moon. A very high-tech model, their unique form combined with thermal aspects and a waterproof exterior invaded ski stations and their ever-growing clientèle. The Moon Boot became a part of our collective consciousness, to the point that in 1999 they were named one of the most emblematic designs of the 20th century at the Carousel du Louvre expo. Beyond their unique and functional qualities inspired by a major world event of the 20th century, they symbolise the creative meeting of fashion and history. Slightly different yet always the same, the Moon Boot is continuously revamped in fun colours and insulating materials to combine style and comfort. Whether at the ski lodge or on the snowy city streets, the Moon Boot is the must-have accessory for a trendy winter! 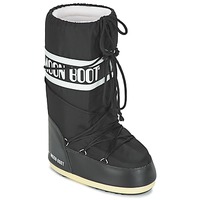