Skip to main content
Manage your cookies preferences
Spartoo uses cookies that are strictly necessary for the operation of the website, as well as for the personalization of content and traffic analysis. Our partners use cookies to display personalized advertising based on your browsing and profile. If you click on all "accept all and close" below, you can change your preferences at any time through your customer account. If you click on "refuse all", only cookies strictly necessary for the operation of the site will be used.

Naf Naf : the big bad look!
A women's ready-to-wear brand since 1973, Naf Naf was founded by the three Pariente brothers who started by opening their first boutique named "Influence". Their first collection was launched in 1978 with a name that remains a legend in the fashion world, taken from a children's fable "Les trois petits cochons (The three little pigs)". Season after season, from collection to collection, Naf Naf continued to make a name for itself until finally becoming famous in 1983 by revolutionising fashion with a product that has since become legendary: the cotton jumpsuit. The following year, the slogan "le grand méchant look (the big bad look)" gave the brand so much publicity that they quickly became known internationally. From that point on, they have diversified their collections and offer a wide variety of accessories going from sunglasses to jewellery and leather goods. Today, Naf Naf is a top choice for fashionistas and provide a wide variety of looks and silhouettes. 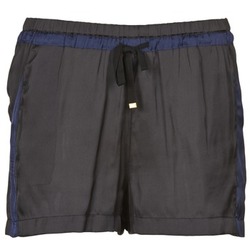